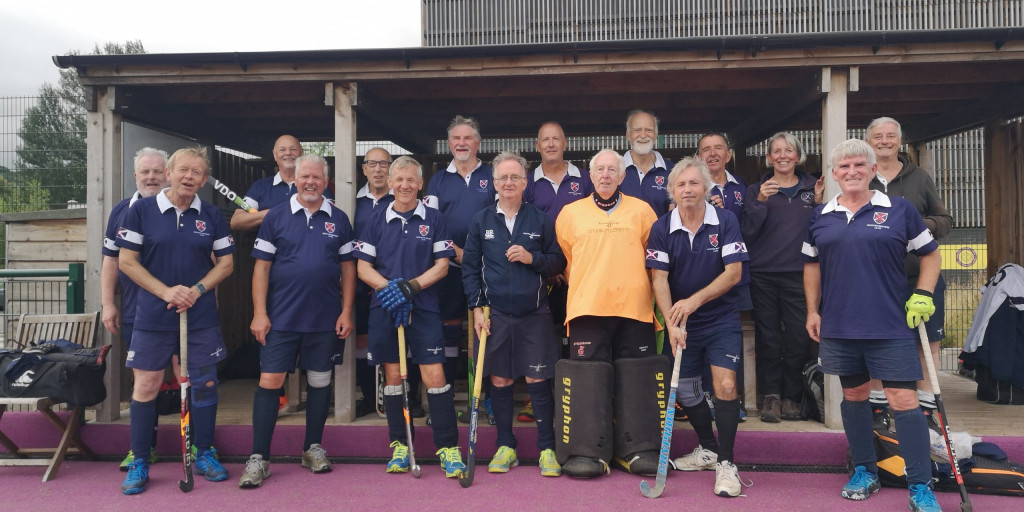 A pretty bunch, well a pretty regular bunch and a relative newcomer Ross Gallacher attending to see first-hand what Thistles on Toor means.

LX Bishops.  Loss 0-3.  After discussions the previous evening with Timothy Taylor, Captain Neil Ward was trying out a new combination: 1, 3, 2, 3, 1, 2 which worked until the umpire did his headcount.  Unfortunately the LX Bishops moved diagonally to unpick the lock three times but you have to start somewhere.

LX Earls.  Win 2-1.  The pack was shuffled within the new formation but this time it was successful.  Iain Lynch and Peter Klein found that LX had left their keys lying in the circle, stealing two excellent goals whilst the rejigged defence teased LX Earls into believing they could score more than one.

LX Knights. Loss 1-2.  After a swift lunch we returned to the muddy fray - the pitch had been used as allotments during lockdown (being cleaned soon) and had turned to slippy mud.  Still I came back with 2lb of spuds and Iain Lynch came back having dug out another well taken goal.

Dragons.  Draw 0-0.  In need of some non-English entertainment we had more chances than Dragons but their borrowed LX GK was excellent including spoiling Peter Klein's day by saving a well taken PS - Peter has since sought advice from the England football team.

That evening we sought counsel with Timothy Taylor before joining the buffet laid on in a local hotel.

Dragons.  Lost 0-2.  During the previous evening the Landlord had left us with heavy heads whilst the Dragons flew in a couple of fresh players for the day.  Not our finest hour or even 25 minutes.

LX Knights.  Loss 1-2.  Reinvigorated, though sadly not rejuvenated, we tackled the Knights with gusto (similar to Brasso) with Martin Fuller spoiling their assumed to be winning ways until we leaked two goals.

LX Earls.  Lost 0-6.  Capt Ward (DSO and later, bar) made his only miscalculation sending fresh but not battle-hardened troops in against what turned out to the tournament winners - on goal difference!

LX Bishops. Lost 1-2.  Excellent game with Lance Corporal Lynch stabbing the ball into the net.  Lots of compliments from Bishops who reckoned it was their best match.

Timothy Taylor was waiting for us to join the evening's discussions.  He was also at the Rugby Club for the BBQ.  Unfortunately he took for ever to get changed; fortunately it was Capt Ward's turn to buy beer for his two Loo-tenants (side effect of knowing Timothy).  As soon as Timothy was ready Capt Ward gave his most rousing speech "Six pints please, we've earned it."

We formed a Celtic North (Thistles Blue in colour) and a Celtic West team (Dragon Red in colour) to play a team of less young LX and a team that was just old enough to vote in the LX election.

Thistles Celtic North team.  Lost (unofficially) 1-2.  Great game, end to end stuff with Ian McCreath smashing home a goal but for the (not yet awake) umpire to blow with the ball in the air heading for goal for a foul to us outside the circle.  Again much respect from LX to us for a great match.  Thanks to Nick, Lesley and John from Dragons for joining us.

Home time!  Not so fast; Capt Ward volunteered some of our Highland Light Infantry for the Welsh Guards: Klein, McCreath and Lynch with D Dunbar in support.  Dragons Celtic West team.  Lost 1-3.  Our Sgt Klein earned his stripes with a well taken PC.

Thistles got special mention in dispatches: only team to beat the winners LX Earls; only team to score against LX Bishops; and the most enjoyable team to play against.

Special thanks to Captain and to Neil ("Do it to me one more time") Mackenzie as event organiser.