In Southgate, London instead of Swansea 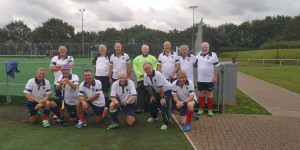 Ian McCreath presenting the organisers with the spirit of the game. In our case whisky 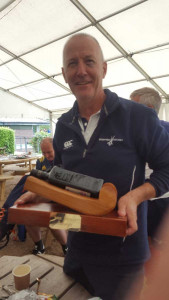 Radio Two decided everything that weekend was about the Bee and Bees like Thistles so the auspices were good.  With Swansea Astro unavailable Dragons Festival was held in Southgate, London.  Compared to Swansea there were a few disappointments: the food and drinks were London prices, the tap water had been recycled many times and despite the revised location the Curse of the Dragon continued.

Starting in the usual Thistles way - "who are you?" we buzzed around for the first half but produced only a couple of misses: Peter's great PC strike and Brian an inch from scoring.  Then when Umpire one blew we stopped, they didn't and we were one down.  Neil climbing on his high horse was to no avail - Umpire two was away singing "where the Bee sucks there suck I".

Second half was much better: six different Thistles all having shots but even John M's great bouncer ended up wide.  We kept our Bee sting for the next game.

The rain, thunder and lightning meant it wasn't a time for a Thistles' Bee to stray far from home though Alan had a great almost-goal.  With the rain stopped the second half was a hive of activity for Thistles with three penalty corners and three other good shots on goal including one from Jim miraculously saved on the line.  Despite Nigel's many great saves three goals leaked in like water into my shoes.

This was rescheduled from the acceptable middle of three games with gaps either side to the third game immediately following the previous.  Tiredness showed and we bumbled along as best we could but their GK only touched the ball once in the first half and that was straight from the quarter restart 🙂

Ian McC's half time team talk and waggle dance changed things and Thistles' Bees went foraging: two PCs, one shot on goal and we had them swatting frantically at us all over the pitch.  The Curse of the Dragon though meant no success and well-tired we let in two late goals which took LX to seven.

A night supping nectar in the Griffin revived us.

Alan came up with Plan Bee: Thistles in White and Red socks so Dragons had to change into multi-coloured socks.  Our defence was awesome: John M was everywhere whilst Neil marshalled two from Ian D, Dobbin and John S.  Nigel in goal saved on numerous occasions and all else of theirs failed, like in the final two seconds when we lifted the goal and moved it slightly left so they missed.  Meanwhile Peter and Ian McC were both strong at centre mids feeding Donald, Martin and Keith with Jim screaming across the circle.  Peter had a just-miss from a great PC and Ian McC had an excellent shot just-saved.  It was fun to, especially when one of the Dragons lost the plot and made a B-line for the naughty step.  Then a moment of history: John S subbed for Alan into the forward line and immediately collected the ball and entered the circle - was this to Bee the moment for the annals?  Sadly not, but not for want of trying.  A draw against such a good side was the Bees Knees.

Though we came off happy but dead Bee-t the curse of the Dragons continues: no goals.  But we won the only trophy on offer: "most umpire friendly" - all the other teams must have been miserable B's.