While the 'Anglos' were playing in Bedford against the home team, the Scottish-based players turned up at Dalnacraig, Dundee to take part in a short training session followed by a game of three halves between the Blue team under John Connaghan and the White team captained by Peter Gordon.

The teams were well matched but, after the first ten minutes, Whites gradually took command, with Ben Gibson running the midfield. The only fly in the ointment was the inability of the forward players to convert the many chances that fell to them into goals, something they were to rue before the game ended. Alan Parker finally netted to put Whites in front before the first break, though they could easily have been three or four ahead.

Whites lost two of their key players at the break, both Ben Gibson and Paul Docherty having to miss the rest of the match, and the pattern of play reversed, with Blues now pressing the White defence, which finally crumbled when a shot-cum-cross from the left hand side of the circle was deflected twice off defenders' sticks before going into the net between the legs of the White keeper. John Connaghan was causing all sorts of trouble with probing runs into the White circle and, in the end, he turned Ian Downie and crashed in a fine winner to claim the match for the Blues.

Considering that most of the players had not played a hockey match in over a year, some good hockey was played, and the players came off knowing they'd been in a tight match. 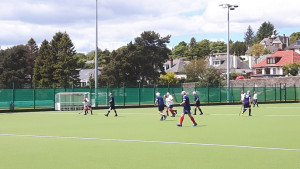 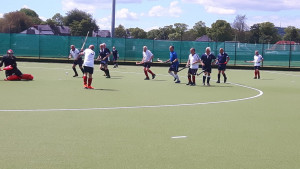 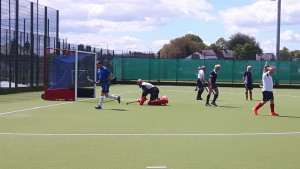