One team open age range. Several games each day.
A classic event on the Thistles calendar with three Welsh SOM teams and various teams from England.

As you probably know, the Swansea tournament has had to be moved.  This was because of a new pitch being laid at the University and also the accommodation not being available.
Rather than cancel the event, the Welsh Dragons have rearranged the tournament to be at Southgate Hockey club, so the details so far are as follows.
Welsh Dragons Festival (in England)
Sat 31st July and Sunday 1st August
Southgate Hockey Club, North London (not Swansea)

The Matches and Umpires 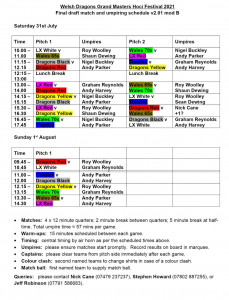 Accommodation at this stage needs booking now, as prices for the end of this month are rising.  Below is a list from the Southgate Club.  PLEASE NOTE, the prices are from a previous time and not current, however, they give you an idea of comparative prices.  Click to enlarge.  Another comment is that the choice of hotel may be determined on traffic flow.  when we stayed at a Premier Inn for Home internationals a few years ago, the traffic was really bad as we were trying to cross the main flow of traffic around Enfield, taking a long time to get to games.

Most of the team are staying at the Travelodge in Whetstone 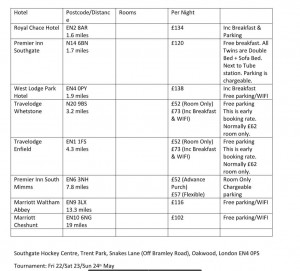 Picnic basket for each team, paid for in the event fee

Lasagne at the clubhouse in the evening cost £15 (need to know numbers a.s.a.p.)