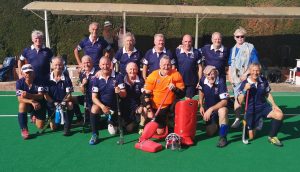 65s - gaps left for those missing. Click to enlarge

For certain a wonderful event in a glorious city (oh, no, not another sunny day...) with great food, drink and company - if you've never been on tour with Thistles you really don't know what you are missing.  Not our finest result though - very good in parts but thin on goal-scoring when it really mattered.  Perhaps more numbers (squad was reduced to 13) and less loan players to others (two to our 70s, some to Alliance and to Wales who returned the favour).

Monday we started disorganised and lost a game that was there for the winning.

Tuesday the Argies worried us (18 squad and 4 on staff) until we started and ran them ragged but left it until the last (literally) 15 seconds: pass from circle, pass from halfway, pass inside the circle, goal (3 seconds remaining).  This is who Thistles are.

Against LX we had three mistakes ("shitey" goals) but in open play we held firm and had several chances.  Nice to hear the winners arguing with each other at the end 🙂

Wednesday we were so outclassed by what was mainly the Dutch full international team including the best player I think I have ever played against; they won the event.  Yet in the second game of the day we had the Spanish on the ropes; only one goal but should have been more.

Thursday and Friday was a slippery slope.  A great first half against the Germans and with the match for the taking tiredness hit and the magic touch faded.  Friday, the team was somewhat jaded with low discipline; one Argy breakaway and a huge number of chances against the French yet no goals.  Thus we missed out on the play-offs.

For Saturday I'll quote from the esteemed Peter Klein.  "The pre-match talk was all about getting the ball wide, driving into the D and squaring; and bugger me we did it on the 1st attack.  Ian McCreath ventured forward fed a ball wide for Peter Klein to drive in and get behind the French defence and squared to Iain Lynch who blasted it home.

Not surprisingly the pre-match talk for the next game against Spain was all about getting the ball wide driving into the D and squaring and not hitting across the open defenders sticks from the 25 into the D. The heat must have got to Martin Fuller who completely ignored the instructions and whistled a cross from the 25 to the far post where poacher Iain Cameron slotted the winning goal.

When you look at the results we didn’t do too badly."

I couldn't have put it better myself. 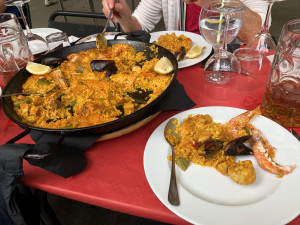 Paella for one, please