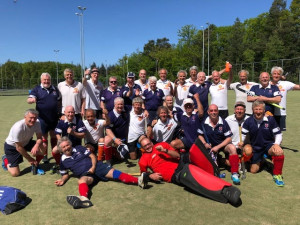 Friday 6th May
0-6 vs Netherlands A team.  This was a team packed full of existing and past international players who caught Scotland cold at the start of the tournament. The Scots held onto a nil nil position for the first 10 minutes of the game but ultimately succumbed in a flurry of goals to a team that were destined to win the tournament by a significant margin.
2-0 vs Alliance.  Much better from Scotland with good running off the ball and some defiant defending when Alliance pressed forward. Scoring from a short corner out to Derek  Johnstone and a slick  ball into Jim Watson who finished at the near post . Later in the match a deft backhand from Paul Bateson saw the Alliance keeper  dumfounded to see the ball in the net
1-3 Vs Germany.  This was a close fought game that showed Scottish mettle against a strong German team. Keeper Roberts kept the Germans at bay for long periods while the midfield fought a close battle with the German four who were exceptionally mobile . With the Germans 2 nil up against the run of play Scotland converted a corner with a strong hit from Connaghan that must have done some damage to the backboard.  The last ten minutes saw Scotland pressing for an equaliser but it was Germany who converted from their one remaining foray into the Scottish D. Of particular note was the fantastic bit of  skill from Neil Mackenzie who managed to deflect a  rapidly rising ball bound for the top corner of the Scottish goal and deflecting it over for a long corner towards the end of the match.
Saturday 7th
0-0 vs England LX.  Possibly Scotlands best game of the weekend, Picking up from the game against Germany Scotland gave as good as they got. Mc Kenzie, Ward and Michalik at the back bolstered by Campbell kept the English comfortably under control when they reached the Scottish 25.   Neil Ward deflected a lifted ball bound for the top corner over the top of the crossbar in a mirror image of the skills displayed by Mackenzie in the previous match saving an almost certain goal from the English. While having fewer chances at Goal the  midfield  duo of Candlin and Johnstone with Klein playing deeper were more than capable of holding their own against an English side who expected to dominate midfield. The chances that fell to the forward line of  Watson, Bateson and Lorimer were not to be with the English keeper making some good interceptions
1-3 vs Old Lions{Belgium) Scotland went into this match unprepared for a tougher game than expected. the confidence gained against the English and Germans rapidly dissipated as a stronger than expected Belgian team ( made up of most of their international squad plus a "guest aged 58").  Despite great efforts from Fuller and Heeps who gamely played out of position and exceptionally strong running from Klein and Michalik the Belgians were able to slot three past Scotland, with two scored by their youngest player who had the freshest legs on the pitch,  A foul on Lorimer who won a penalty was converted by Johnstone in his usual efficient style.
0-1 vs Shamrocks(Ireland).  Despite having 70% possession Scotland could not make an impression on the Irish goal that was  marshalled at the back by  Mike McInally who was a "guest"  for a depleted Irish side. Scotland gained a number of Short corners but were unable to penetrate an Irish defence that held firm.  A breakaway goal by the irish side saw them defeat Scotland at the end of the match.
Sunday 8th
1-1 vs Netherlands B team
0-0 vs Netherlands B team
Scotland ended the tournament with two matches against the Dutch B team, Despite two draws Scotland held their heads up to play strongly and over the two matches threatened the Dutch goal on a regular basis.  The Dutch played in their usual robust style with a number of questionable stick tackles that the Dutch umpires let ride. Halfway through the first match a long range pass from Connaghan found Lorimer who controlled the ball and with a quick turn was able to send it past the Dutch goalkeeper to end the match as a draw. The second match of the day saw Scotland give as good as they got with the chances evenly spread. The match ended nil nil and all the individual battles on field were forgotten as both teams came together to celebrate the spirit of masters in a joint team photograph( see photo attached via separate e mail )
Report from John Connaghan Captain of Thistles Blue over 65s 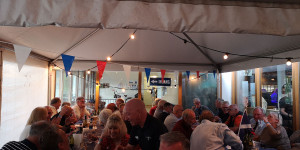 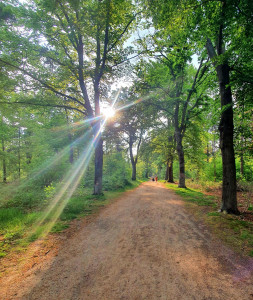 Walk to the game from hotel 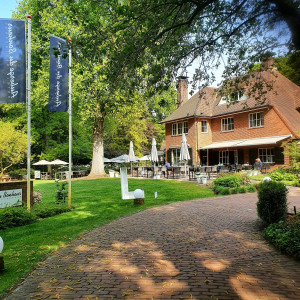 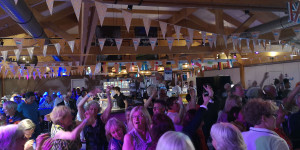