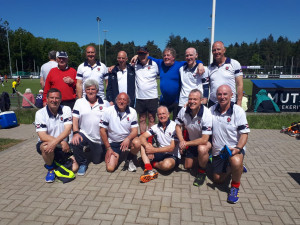 Game 1.  This year there has been more cohesion in the o60s Thistles and for once we came out of the blocks at pace.  The German 60 A team were very good but we matched them with near equal number of PCs though fewer shots on goal.  It took us to make two linked mistakes to leak the one goal.

Game 2.  We were outclassed by Archangels in every way.  It wasn't that we were terrible but we could gain no traction: pounced on at half-way, out-passed and out-paced in our half.  It shows though that we do have resilience as without that it would have been much worse.

Game 3.  Chastened but not distraught for the final game against the Dutch B team we were fully their equal for ten minutes when there was an epic collapse - two of our stars went off injured.  We regained composure for the final five minutes including a PC and shot on goal but it was too late.

Game 1.  Weakened by the loss of Captain Lees but fortified by Scottish wine the previous night we opened against LX at their pace matching them and perhaps exceeding their PC/shot at goal ratio.  It took an utterly unjust kicked by them in front of goal for them to score their one goal.

Game 2.  For Netherlands A we weren't at the races never mind on the pitch.  Probably for fifteen minutes it was our worst performance however about ¾ of the way through our resilience kicked in and we developed what became the Thistles midfield press.  Despite having lost a shed load of goals we held them at bay and attacked.

Game 3.  Every festival has its moments and this was Thistles resilience at its best.  Archangels GK had had two shots to save all weekend and we managed to wake him to kick!  Having developed the Thistles Press (not D.C. Thomson) it worked.  They had few shots on goal, few PC and but for their one inspired moment of play it could have been 2018 again (0-0, what a result!).  Ourselves and Germany A (2nd) were the only teams with scores that close.  Afterwards they claimed they were tired; as for us, absolutely buzzing, we headed for the bar.

Game 1.  Ach, against LX we were tired - the score was flattering but probably deserved.  Eventually the legs kicked in with ten minutes to go; not a huge amount of attack but a definite "they shall not pass" mentality that held them in midfield for the remainder of the game.

Game 2.  Did I mention every festival has its moments?  Against the Dutch A team (who had beaten us by 7) we came into our own.  They could have scored but the way we played it wasn't that likely.  More attacks, some shots and more PCs for us than them.  Then the moment:  McCreath, takes the long corner and subsequent free hit near the circle to buy a PC; great injection and Chitty strikes - GOAL! Seven minutes remain of midfield press and resilient defence including the slowest runs ever to get the ball at 16s and the hooter goes.  They were distraught.  We didn't even know how to celebrate but awarded Chitty a CBE (Centre Back Extraordinaire) and McCreath the DSO (distinguished Sweeper order) and Bar (sent there for beer).