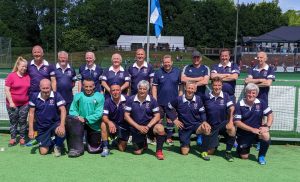 Friday's rain made us feel at home and helped create a quite polished performance against England 65B with a good PC goal finished by Iain Lynch.  The team defended well and achieved maybe 40% of the attacks but no field goals to show for it.  Good finishing by England sealed their win.

Saturday morning was like a summer holiday in Rothesay - damp but sunny.  We were resolute against LX60s with perhaps 35% of the attacks, several PCs and shots saved but no conversions.  Repeatedly resilient to their circle approaches occasional mistakes allowed a goal in each half.

Then the sun shone on England 60B.  They were seriously good but it was not all one way.  We had maybe 20% of the attacks and forced a couple of saves.  They were faster on the turn and clinical in their finishing.  The score may imply a whitewash but in fact they were highly complementary of how hard they had been made to work. 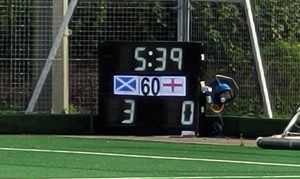 Sunday was more like Benidorm.  Both ourselves and Wales were fighting the suntan and for the playoff slot.  We can claim maybe 65% of the attacks including some spectacular saves by their GK yet still the goal drought continued.  However our resolute defending in previous games meant a draw put us in the playoffs.

Playoff third-fourth.  In the relentless sun our skin was peeling and our play was appealing but England 65B wanted to prove they were better than the first game.  Good finishing by them, 30% of attacks by us and respect from them as we finished the last few minutes buzzing their circle and goal, fighting to the bitter end.

Why the information on percentage attack?  We've been on a journey this year and have tidied up previous Thistles' problems in defence and midfield to be competitive as the percentages show, however the goal drought continues.  Goal scoring has to be the next step in our progress and some fertiliser and good Scottish rain should sort this out.

Last word from our GK Mason Fenlon (one of LX's top GKs) who was effusive in his praise for a team that fights, regardless of the score, to the very last minute.  He admired the Thistles ethos of fair pitch time and support for every player.  You seem to get the best out of everyone, he said, and he'd be more than happy to play for us again.