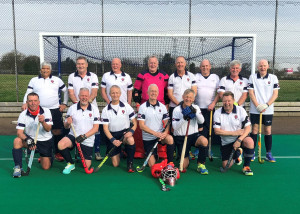 Thanks to Mike and Heather (aka "she who must be obeyed") for running the bench.

Thistles o60s were invited to the Celtic Cup in place of France o60s to play friendlies against the three other full international teams.  Without question the better teams all won but that does not tell the whole story.

Dundee last year, as well as being a great event, sowed a seed that Thistles can present not just fun festival sides but teams that can compete at a high level.  With LX 60s and LX 65s wanting a competitive warm up fixture at Wakefield we knew we would need a fresh intake of players.  The Wakefield date overlapped with International training yet those that were available proved our mettle and over four shortened games we drew one and held LX to a single goal against us in each of the other three.

Friday in Aberdeen we took the strategy from Wakefield however the Thistles curse of all seeming like strangers (quite a few were newbies remember) and we weren't really set for the match against Wales.  Not our best game but the Welsh knew we had given fight and applauded genuinely when we scored in the final few minutes.  The strategy was sound, the players were good - we just hadn't bedded in yet.

Saturday against our own International o60s was fascinating; their strengths were on display but also some weaknesses.  We tweaked our strategy a little and barring their inherent quality - PC goals in the first few minutes, the start of the second half and at the very end - for the rest of the game we showed dogged resilience.  Their strengths in crowding the ball every time we crossed the half way line meant we never had a shot on goal (poor Jim Frail was cold and wet at the end, it was Aberdeen after all).  The better team clearly won but not by what they might have imagined and Thistles stood proud.

Sunday versus Ireland International 60s: poor Paul Docherty who had had Covid stayed in bed and Jim Frail, wanting to warm up at last came in (it was played as friendlies remember).  What a game!  Ireland deserved to win but they got a fright - how often were we in their half, in their 25 and in their circle!  However we were also in our own; we scored three goals - one at their end and two at our own!  For some reason they didn't press which allowed us to play great Thistles hockey.  Our strategy worked, the team played great and barring some holes in attackers' sticks who knows what the result might have been.  Cliff Martin (sneaking onto the dark green side: "Cliff, I am your father...") had prepped Ireland that however the game went Thistles was a worthy side to play against.  Great attitude, great game and I went home with her ("she who must be obeyed") singing the praises of how well Thistles had contributed to the competition.  BTW the bacon rolls in Dundee's Horn Cafe are still wonderful.